What is Stack & Tilt?

Three of the most polarizing words in the world of golf coaching are “Stack & Tilt”. When the feature article in the June 2007 issue of Golf Digest hit newsstands, golfers and teachers alike had mixed reactions. Some saw it as a revolution in the way the game was taught and played. Others saw it as a way to take the athleticism and creativity out of how they swung a golf club. Regardless of public opinion, Stack & Tilt swept the PGA Tour like wildfire, creating 8 first-time winners on Tour and since 2005 has earned more than $50 million in prize money.

Stack & Tilt is the creation of teaching professionals Andy Plummer and Mike Bennett. Having roots in The Golfing Machine (a textbook compiled by Boeing engineer Homer Kelley, long considered the most thorough golf instruction book in existence), they sought out to create consistency in both the information they delivered and the results it produced.

Truth be told, Stack & Tilt isn’t a golf swing, but rather a system for understanding the game. It takes all of the possible variables, identifies what is essential and then gives the coach and player a system to measure the various pieces. Having a model to work from allows the coach to problem solve in a consistent and predictable way.

As a Stack & Tilt Authorized Instructor, I get equal amounts of push back and praise. On the surface, fellow golf coaches bemoan a system, claiming it is too one-dimensional and lacks freedom. Behind closed doors, my email inbox gets inquiries weekly from golfers who crave an organized approach to learning the game and consistency in a message from their coach.

“The swing cannot be understood without considering its function” Andy Plummer

To establish a list of priorities in which to progress through, we need to first identify what the function of the swing is. Many golf instructors would state that the golfer’s grip, alignment, stance and posture would be the first things to cover in a lesson setting, marking those as the fundamentals to a good swing. While they are important, they aren’t fundamental. I say that because the best players in the world all have different stances, alignments, ball positions and postures. If they were truly the fundamentals, the best players in the world would all do them the same.

The first fundamental would be the ability to hit the ground in the same place every time. In my work with average golfers, the resounding wish among them is to “be more consistent”. What they are referring to is the ability to strike the ball the same way every time.

The second piece that would have a great affect on controlling the low point would be the angle the wrists are set at address, at the top of the backswing and then at impact. Golfers who cast the club in the downswing are making the arc of the swing longer, where the club will strike the ground before the ball.

The second fundamental is the ability to hit the ball far enough to play the course. Note that this isn’t the ability to hit the ball as far as you can. There are three ways a golfer moves their body during the swing; flexing/extending, rotating left and right, and side-bending (tilting). It was the side-bending aspect that had never really been discussed in golf instruction, and had coaches around the game up in arms about potential back injuries.

The third fundamental is the ability to control the start direction, curve and trajectory of the golf ball. The golfers on the professional tours spend 90% of their time improving the third fundamental in their game. One of the things that I found the most interesting early on in my Stack & Tilt journey was the shot tree diagram, which outlines the three families of ball flights and how they are created. 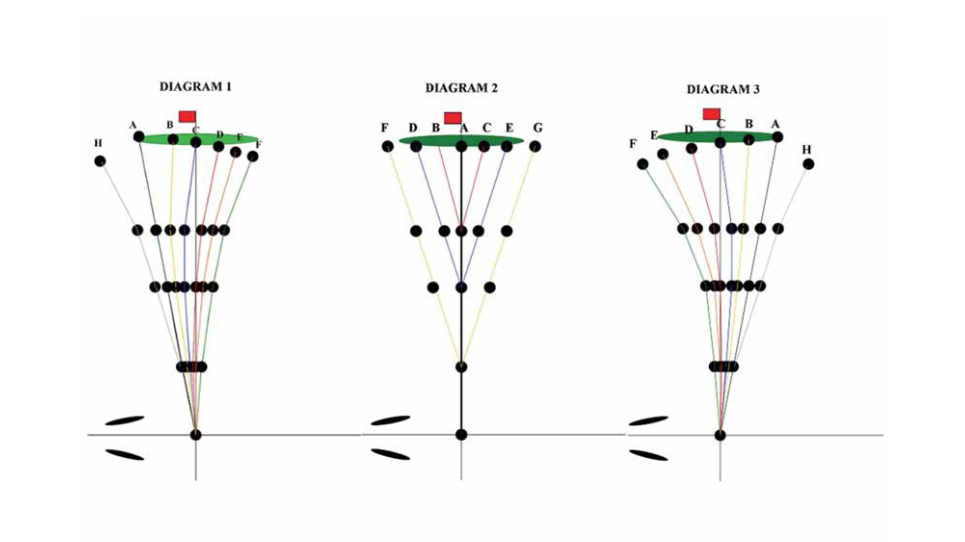 The above diagram, from page 122 from Andy Plummer and Mike Bennett’s book The Stack & Tilt Swing, classifies the different shots a golfer can hit, grouping them into three distinct trees. The idea here is that for example, shots 1H and 3E look very similar, however are created in different manners. 1H pulls more than it curves, whereas 3E curves more than it pulls. If a coach saw 1H and gave them the 3E “fix”, that player will only make their issue much worse.

To give golfers a starting point to improve their three fundamentals, the ten word template was created as a way to offer a framework. As discussed above, the fundamentals are to control the low-point, hit the ball far enough to play the course and to have a predictable, controllable curve of the golf ball.

This refers to the golfer’s weight at the setup. To achieve this, the golfer should bump their lead hip slightly towards the target, placing approximately 55% of their weight on their lead foot. At the highest levels of the game, players shift their pressure a small amount throughout the swing, depending on the club they are hitting. At the amateur level, I advocate a golfer shift as little as possible until they can control their low-point with great certainty.

Hands in has a two-pronged effect on the swing. First, power is created by moving the hands in an arc around the body rather than in a straight line. Second, moving the hands inwards in the backswing is a necessary step in being able to draw the ball.

Arms straight is a contact piece in most cases. In order for the club to strike the ground the same way each time, it needs to remain the same effective length. Golfers who bend the arms through impact hit the ball thin quite often.

Tucking the hips through the finish also has several benefits. From a power standpoint, extending the legs and the spine allows the golfer to maximize their vertical power. From a curve standpoint, tucking the hips keeps the golf club traveling on the same arc through the finish. When a golfer finishes the swing with forward flex, it shifts the swing direction excessively across the body, which can create steeper divots, high spin rates, pulls and slices.

The 10 words above are a simple framework to start from. You can find examples of great players from all eras exhibiting these moves. How much they do it and for how long will vary player to player, but the commonalities are there if you look for them.

HOW CAN STACK & TILT HELP ME?

As Plummer and Bennett said in The Stack & Tilt Swing, a player can use this information in a number of ways. They can learn the game using this framework, starting from the beginning. The other option is to use this information as a reference, incorporating fixes when necessary. More than anything, I feel as though Stack & Tilt is a system that organizes the game. It gives an assignment to each piece of the swing, a description of what it does, a measurement for how much is enough and a way to troubleshoot when it doesn’t perform properly.

In this information age that we live in, never before have we been so inundated with YouTube videos, Instagram videos, articles, tips and quick fixes. While some of this information might be accurate, what it lacks is context. You could pull a page out of one of Shakespeare’s novels, however without the proper context the meaning behind the words is lost. Stack & Tilt is built on a foundation of consistency and understanding, both for the player and the coach. It’s that consistency and understanding that you need to take your game to the next level.

Nick Adcock is a Senior Coach at Sean Foley Performance in Orlando, FL and an Authorized Stack & Tilt instructor. For more information on Nick or to book a lesson with him, you can visit his website at www.nickadcockgolf.com or connect with him on Skillest for online golf lessons.